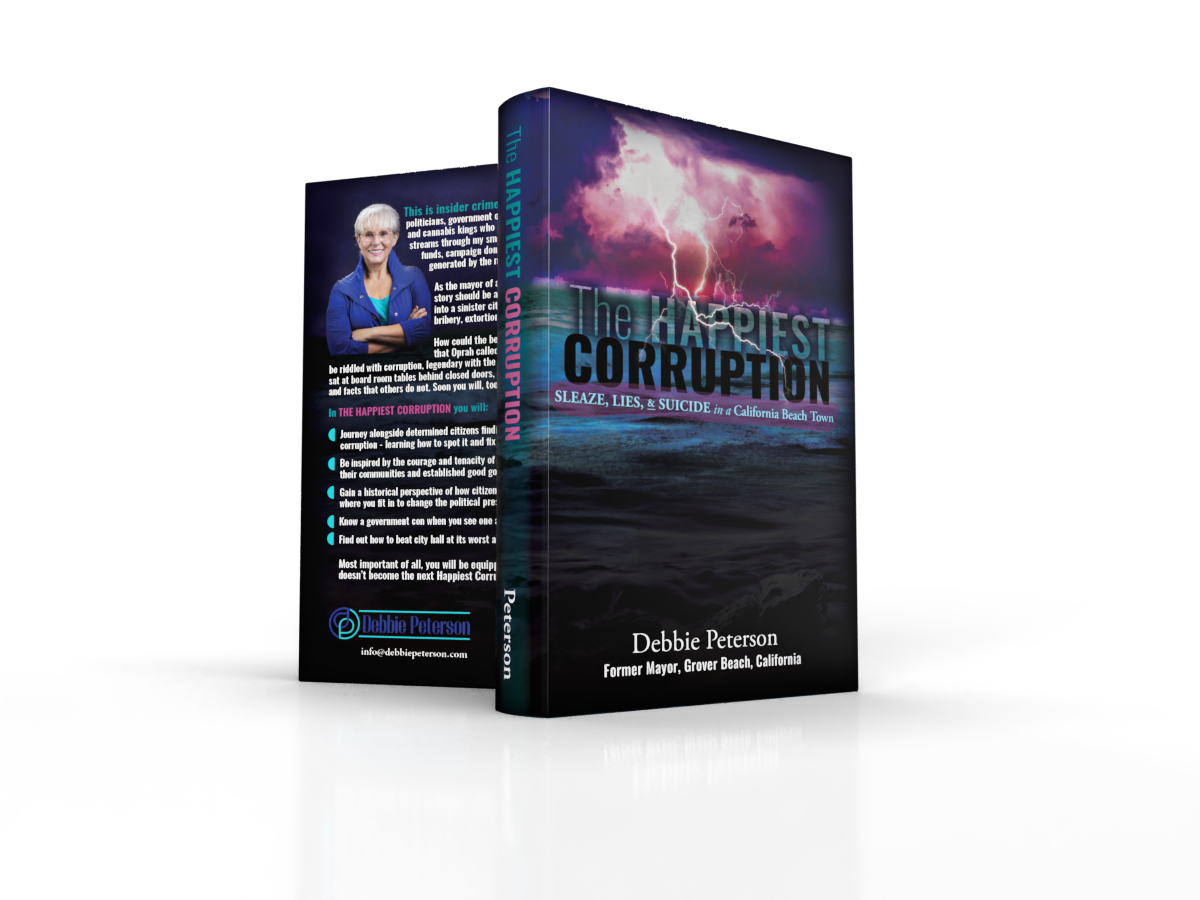 Most important of all, communities now know how to be sure their hometown doesn’t become the next Happiest Corruption in America.

Local Government 101 – a guide for would-be elected representatives, appointees, and activists.  What nobody tells you about being a city councilmember.

How to Beat City Hall – Strategies for beating city hall from a former mayor.

This is a true-crime story written by an insider. It is the account of politicians, government officials, developers, contractors, and cannabis kings, who operate a criminal machine that streams through every part of a small county, bankrolled by public funds, campaign donations, and pallet loads of cash generated by the most valuable crop in the nation.

It is a businesswoman’s journey from planning commission chair to city council member to mayor in the friendly little beach town she called “Kansas at the Beach.” It should have been a happy memoire. Instead, it evolved into a sinister citizens-turned-spy suspense epic of bribery, extortion, dark money, and death.

Like her neighbors, for years she couldn’t believe that the beaches, verdant crops, and wine-grape-clad hills that Oprah called the ‘happiest city in America’ and locals call ‘paradise’ could be riddled with corruption. But as the mayor, she heard whispered stories, sat around board room tables behind closed doors, and had access to people and facts that others do not.

She was able to connect the dots between dysfunctional boards, sexual harassment, whistleblowers, and millions of dollars missing from accounts. As the press and the public bought into and repeated the lies of conmen, the cabal coopted whole city councils, county departments, and businesses and delivered on both threats and promises.

A widely diverse group of sincere citizens previously unknown to one another and from all walks of life with little in common except the determination to bring integrity to their local government exposed facts and figures corroborating an epidemic of crime as far-reaching as Central America, Korea, Vietnam, and Russia. The informants coalesced to fight for honest governance putting their jobs, their reputations, their businesses, and their families at risk of reprisal because they simply couldn’t let this happen to their community. Together they uncovered the covert patterns and practices of the corrupt machine.

Press releases from the District Attorney, the Federal Bureau of Investigation, and the Department of Public Health matched the accounts from the brave citizens – number one in the state and number two in the nation in real estate loan fraud in 2012, a 2020 spike in synthetic opioid deaths to 55% above the state level, and the homicide capital of the country in 1850.

“A must-read, firsthand account of trouble in paradise from a former mayor who spent years in the political trenches. Peterson offers a much-needed primer for keeping local government open and accountable. Buy two copies. One for you and one for your local representative.”

Get Your Free Copy of Profile of a Government Criminal

Want to know how to identify white-collar criminals in the government or in any workplace? Download Debbie's video, Profile of a Government Criminal.