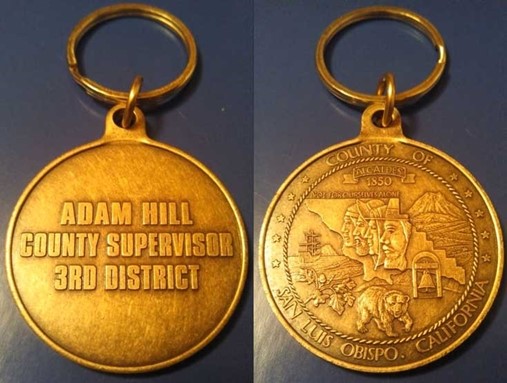 Cannabis wasn’t the only gig of corrupt players; it was just the new gig. I had a reputation for turning corruption around and cleaning up local agencies. As I became known for doing so, my council, under the thumb of the mayor, vice mayor, and the corrupt supervisor blocked my appointment to any agency boards that had a history of whistleblowers or misconduct.

Extortion – Using coercive threats, directly or indirectly, under color of authority to demand unmerited cooperation or compensation. The County supervisor had many ways of getting the votes he wanted from the city council. At one meeting he left a medallion at each council member’s seat on the dais. Just a little reminder that he was there. At other times he sent scurrilous emails to city council members telling them I was an “embarrassment.” Nearly every time he attended a council meeting he would wax eloquent about how much he gave to the city and to local charities and stated he could continue to do so with veiled threats that if they didn’t vote his way, our charities would suffer. Any that had any association with me lost funding. He even waved a list at one of the meetings of all the money he had given.

Pay the Piper Urban Dictionary – Not paying the price (voting as the supervisor wished) may result in dire consequences (funding for charities, or job loss), as in the Pied Piper, story – when townsfolk didn’t pay the piper for ridding the town of rats the piper kidnapped the town’s children.

These were the threats made in public. More insidious was that three of the five council members were employed by local public agencies. The supervisor was known for his attempts, both publicized, and privately shared with me, to have anyone who opposed him fired.