From Weeding Out Corruption to Fighting City Hall

Thoughtful people who follow the news may wonder whether good government exists today and, if it does, what it looks like. As a former mayor, council member and planning commissioner and an advocate for good government with a propensity for “telling it like it is,” Debbie Peterson spent years serving communities, seeing people’s needs go unmet because of gross misappropriation of funds.

She is available for interviews on some of the most important governmental issues today. Her advice provides ordinary people with the information they need to have extraordinary impacts on their communities.

Bio – Debbie Peterson is the former mayor of Grover Beach, Calif. She is the host of the new weekly podcast, The Corruption Chronicles by Debbie Peterson and the author of four upcoming books: The Happiest Corruption: Sleazy Lies & Suicide in a California Beach Town; Local Government 101; How to Beat City Hall; and 365 Ways Everyday People Turned On the Lights @ City Hall (And How You Can Too). Her business credentials include two retail cafes, specialist bakeries, a trucking company, and distribution outlets in Scotland and London that grew to 95 employees and $7 million in annual sales in 1992. She studied journalism and radio-TV, and public relations at California State University, Fresno, and the University of Idaho.

“She had moxie and business experience. Voters in 2012 chose her by a wide margin”

Download convenient .zip file with all of the above information here.

Bringing the message of being a good citizen to more people is a noble task, indeed. 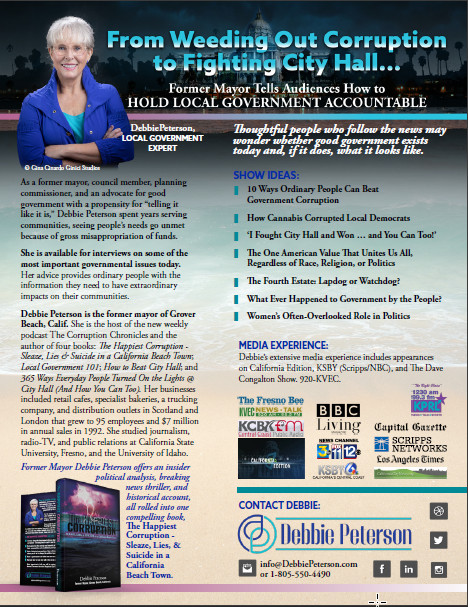